The Second Attack / Death of Gavroche

"The Second Attack" or "Death of Gavroche" is a song of plot importance; it involves Gavroche's running into the enemy lines of fire to retrieve ammunition for the revolutionaries; however, he is killed during a reprise of his "Little People" solo.

Enjolras: How do we stand, Feuilly?
Make your report.

Marius: I will go into the streets
There are bodies all around
Ammunition to be had
Lots of bullets to be found!

Enjolras: I won't let you go
It's too much of a chance.

Marius: The same is true
For any man here!

Valjean: Let me go
He's no more than a boy
I am old
I have nothing to fear.

Gavroche: You need somebody quicker
And I volunteer!

[Gavroche climbs to the other side of the barricade.]

Joly: Someone pull him down at once!

Gavroche: Look at me, I'm almost there!

[He collects ammunition from the dead soldiers and puts the bullets in a pack.]

So never kick a dog
Because he's just a pup

We'll fight like twenty armies
And we won't give up.

[In pain, he throws the ammunition to the students.]

So you'd better run for cover
When the pup grows -

[Another gunshot hits Gavroche. He collapses and dies.]

Enjolras: The people have not stirred. We are abandoned by those who still live in fear. Let us not waste lives, let all who wish to go from here.

Gavroche: Do you here the people sing, singing a song of angry men. It is the music...

All: Of a people who will not be slaves again
When the beating of your heart
Echoes the beating of the drums
There is a life about to start when tomorrow comes

When little people fight, We may look easy pickings But we've got some bite!

So never kick a dog Because he's just a pup

We'll fight like twenty armies And we won't give up.

So you'd better run for cover

When the pup grows -

[Another gunshot hits Gavroche. He collapses and dies]

James Fenton had written another song for Gavroche's death, called Ten Little Bullets, on the melody of Gavroche's solo in Look Down. The song did not make it past recordings. Only the Broadway Revival version restarted using it in 2006.

Gavroche:
Ten little bullets in my hand
Ten little snipers neat and clean--
One for the king of this great land
Two for the aristocracy
Three for the bishops and the clergymen
Four for the prefects of police--

Give me a chance, I'll take the lot of them--
Ten little chances to be free
Close your eyes, I'll say when, count to ten. 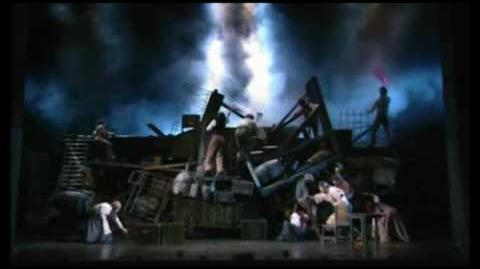 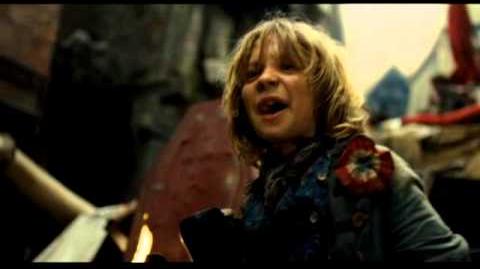