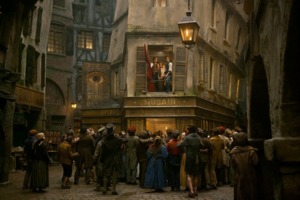 The Café Musain is the main meeting place of Les Amis de l'ABC.

The Actual Cafe Musain is located at The place de pont St. Michel at Edmond Rostrand.

The café is seen in several important songs, most notably "Red and Black."

The café is described, by Hugo, as being in the Place Saint-Michel. The owner of the Musain is not specified; contrary to popular belief, it is not owned by Madame Hucheloup, who is actually the proprietress of the Taverne Corinthe. Les Amis de l'ABC meet in the back room, which is actually rather far from the rest of the café. The back room has an exit by private stairway to the Rue des Grés (now known as the Rue Cujas). We also know that to get from the Rue des Grés to the Rue Monsieur le Prince, one must cross the Place Saint-Michel.

In the 2012 film, after the fall of the barricades, the remaining members of Les Amis de l'ABC hide and barricade themselves inside the cafe, but are shot through the floor boards. As the last surviving member along with Grantaire, Enjolras is shot and falls out of the window of the cafe holding a red revolution flag. His body falls like it is seen doing on the barricades in many musical interpretations, and Grantaire falls to the floor ('as if struck by a thunderbolt', the book says).