Thénardier's Inn is an old chophouse which was situated in Lane Boulanger in Montfermeil, owned by Thénardier and his wife, Madame Thénardier. It is called "Sergeant de Waterloo", named after what Thénardier called himself on the battlefield while he was stealing from the dead.

"Above the door, nailed against the wall, was a board, upon which something was painted that looked like a man carrying on his back another man wearing the heavy epaulettes of a general, gilt and with large silver stars; red blotches typified blood; the remainder of the picture was smoke, and probably represented a battle. Beneath was this inscription: 'To the Sergeant of Waterloo'.

Fantine brought Cosette to live in the inn with the Thénardiers, who sold her wardrobe, forced her to wear rags and made her work and do chores around the inn at a tender age, Fantine completely unaware. Jean Valjean soon bought Cosette from the Thénardiers at 1,500 francs. Not long after, the inn went bankrupt, forcing the family to move to the Gorbeau House in Paris. 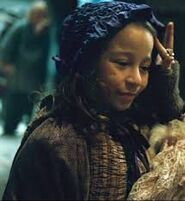 2012 film: Natalya Angel Wallace as Young Eponine at the inn

Shojo Cosette: Cosette, Eponine, and Azelma as toddlers outside of the inn

Shojo Cosette: Cosette at the inn 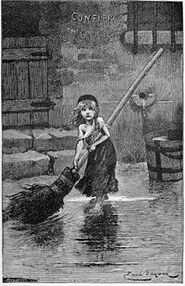 Novel: Cosette just outside the inn