Cosette
Rebecca Caine is a Canadian opera and musical theatre performer. She was born in Toronto and studied at the Guildhall School of Music and Drama in London. She is the daughter of Australian statistician Geoffrey Watson and the granddaughter of British constitutional law scholar Sir William Ivor Jenning. Caine currently resides in London.

Caine’s career has been divided between opera and musical theatre. She made her West End debut at the age of 19 in the role of Laurey in "Oklahoma!". She then sang the role of Eliza in My Fair Lady on a national tour. While making her debut at Glyndebourne as Amor in L'incoronazione di Poppea, she was asked to join the Royal Shakespeare Company where she created the role of Cosette in Les Misérables.

After a successful West End run, she joined the original cast of Phantom of the Opera to play Christine  Daaé opposite Michael Crawford as alternate (performing 2 shows a week) when the original Christine, Sarah Brightman left the show and was replaced by the original alternate, Claire Moore.

When the rights to a Canadian production of Phantom of the Opera were secured, producer Garth Drabinsky aggressively pursued Caine to reprise the role in Toronto. Andrew Lloyd Webber, who greatly admired Caine's portrayal of Christine in the London production, also strongly suggested she take the role. At the time, Caine was very close to signing a contract to star in another West End show. Ultimately, she chose Phantom and relocated to Toronto and also spent time in New York in early 1989 for principal cast rehearsals with director Hal Prince.

The Canadian production of The Phantom of the Opera premiered on September 20, 1989, at the restored Pantages Theatre, with Susan Cuthbert playing Christine two performances per week as Caine's alternate. The show broke then box office records for advance ticket sales, and ran for just over ten years. During her run in Toronto, she joined the Canadian Opera Company to make her North American operatic debut in the title role of Alban Berg's Lulu. This led to offers from numerous international opera companies ranging from Claudio Monteverdi to Peter Maxwell Davies, including Pamina, Despina, Susanna, Aminta (Il re pastore), Vixen, Michaela, Musetta, Ophelie, Leila, Marguerite, Violetta, Julietta (Bohuslav Martinů) and Adina for companies such as the Canadian Opera Company, Scottish Opera, English National Opera, Glimmerglass Opera, Spoleto Festival, Opéra de Nice, Vlaamse Opera, New Zealand Opera, National Theatre of Prague, and Opera North. In 2006 she performed as Hanna Glawari in Franz Lehár's The Merry Widow for Opera Holland Park in London in 2006.

On October 7, 2006, Caine reunited with her former cast colleagues from the original London production of Les Misérables to sing "One Day More" after a performance in celebration of the show's 21st anniversary, making it the longest running musical in the world. The original cast reunited again in 2010 to celebrate the show's 25th anniversary at the O2 Arena in London.

In May 2009, Caine made her Chicago debut in the Chicago Opera Theater's production of Benjamin Britten's Owen Wingrave.

In December 2010, Caine returned to the musical theatre stage as Lady Raeburn in Salad Days produced by Tête à Tête.

In May 2011, Caine played Ottavia in a jazz adaptation of The Coronation of Poppea directed by Mark Ravenhill.

In the summer of 2012, Caine played Baroness Elsa Schraeder in the Sound of Music at the Kilworth House Theatre in Leicestershire. The production also featured Helena Blackman as Maria and Jan Hartley as Mother Abbess.

Caine continues to perform concerts and solo cabaret performances throughout Britain and North America, in addition to her work with opera and theatre companies. Caine also teaches at Trinity Laban Conservatoire of Music and Dance in Greenwich.

Rebecca Caine as Cosette and Michael Ball as Marius 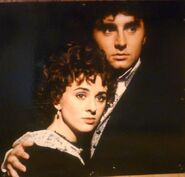 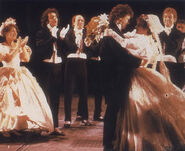 Rebecca as Cosette and Colm Wilkinson as Valjean

Add a photo to this gallery
Retrieved from "https://lesmiserables.fandom.com/wiki/Rebecca_Caine?oldid=26729"
Community content is available under CC-BY-SA unless otherwise noted.