Michael Ashley Ball is a British actor, singer, and radio and TV presenter. He is best known from his role of Marius Pontmercy in the Original London Cast, 10th Anniversary Concert Cast and International Cast, Jean Valjean in the 2004 Windsor Castle Concert and Javert in the 2019 Gielgud Theatre All Star Concert. His voice type is high baritone.

Ball was born in Bromsgrove, Worcestershire to a Welsh mother and an English father. His father trained as an Austin apprentice at the Longbridge plant and went on to become a successful business man, although he had originally wanted to be an actor. Ball's maternal grandfather was a coal miner. His maternal grandmother was protective of the family. Ball has a sister, Katherine, almost a decade his junior. He moved to Dartmoor with his parents when he was three years old. He has never had singing lessons, but as a boy he learned to sing by singing along to music: for example, songs by Ella Fitzgerald, Mahalia Jackson, and Frank Sinatra. When he was 11 years old he went to Plymouth College, an independent boarding school, because his parents thought this would give him a good education, but he did not fit into the academic and sporting environment at the school at that time, and he was unhappy there.

Ball was interested in the theatre and his father took him to see shows in the school holidays, including a Royal Shakespeare Company production at the Royal Shakespeare Theatre of King Lear, which impressed him as a youngster of about 14 years old. He joined a youth theatre, which led to his studying drama at Guildford School of Acting, where he found an environment that suited him. As a student he went busking on Saturdays in Guildford town with a female student friend to earn a little extra money. He graduated in 1984. After his graduation, Ball's singing career rapidly got off the ground. His maternal grandmother, having a musical ear, was proud of Ball's early singing achievements; she died suddenly, however, of a heart attack about one week before his debut in The Pirates of Penzance. 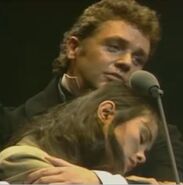 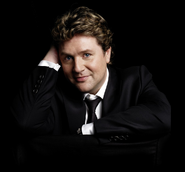 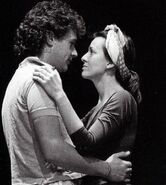 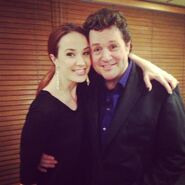 Michael Ball & Sierra Boggess
Add a photo to this gallery

Retrieved from "https://lesmiserables.fandom.com/wiki/Michael_Ball?oldid=29588"
Community content is available under CC-BY-SA unless otherwise noted.