Jean Valjean is the protagonist of Les Misérables.

The story depicts Valjean's struggle to lead a normal life after serving in prison for 19 years. He learns honesty from Bishop Myriel and feels love after retrieving Cosette. He devotes the rest of his life to helping others, especially Cosette (raising her) and Marius (saving his life at the barricades).

Valjean was born into a poor peasant family. His parents died when he was very young, leaving him with his older sister to fend for him. Unfortunately, his sister was widowed, having seven children to look after, the eldest being eight and the youngest being one year old. Valjean went into his father's line of work, getting a job in Faverolles as a tree pruner. While the job only paid the paltry sum of 18 sous a day, Valjean used his meager profits to do what he could for his family. However, when winter came there was no further need for tree pruners. As a result, Valjean was laid off and his family starved. In desperation, he broke the window of a baker named Maubert Isabeau in order to steal bread to feed his sister's children. He was sent to prison for five years for "burglary at night in an inhabited house". While Valjean only said he was given a wooden bed to sleep on when later describing his time in prison, in actuality he had to face much worse conditions as many of his fellow prisoners were dangerous felons and hardened career criminals, and diseases spread rapidly.

He entered the galleys in Toulon in 1796 and left in 1815. During his time there, he was known as Prisoner 24601. Upon Valjean's release, he is issued a passport jaune, or "yellow passport", which he is required to show for identification or present to the police lieutenant of any village he passes through. Valjean's yellow passport states he has been released from prison and a list of his convicted crimes, which is an effective mark of banishment. When Valjean attempts to book a room at an inn, he shows his yellow passport to identify himself, causing the owner and his wife to deny him service on account that they are law-abiding subjects of the Crown and God-fearing people who will not have anything to do with crooks. A woman sees him trying to find a shelter, and tells him to go to the church, where he encounters bishop Myriel of Digne who turns his life around by showing him mercy and encouraging him to become a changed man. While sitting and pondering on what bishop Myriel had said, he accidentally puts his foot on a forty-sous piece dropped by a young chimney-sweep named Petit Gervais. Valjean threatens him with his stick when he attempts to rouse Valjean from his reverie and retrieve his piece. He tells a passing priest his name, and the name of the young chimney-sweep, and this allows the police to charge him with armed robbery, a sentence  that, if he were caught again, would return him to prison with a death-sentence. However, the priest claims there was a mistake, claiming he gave forty sous to Valjean and gives Petit Gervais an identical forty sou coin. Satisfied that there was no robbery, the police drop the accusation, causing Valjean to seriously consider the bishop's recommendation.

The book opens on Montreuil-sur-Mer, where a laborer by the name of Madeleine has set up several textile factories. His products are cheaper, since he has found a way to make them more simply and faster, and in no time he becomes a millionaire--or rather he should be a millionaire, but he spends most of his fortune helping Montreuil: setting up two schools, whose teachers he pays out of his own pocket; endowing beds at the hospital; and so on. This gets him a lot of attention, and the king appoints him mayor twice and nominates him as a Chevalier (Knight) of the Legion of Honor. He turns down both the first appointment and the nomination, though he accepts and becomes mayor the second time.

In 1817, Fantine comes and is employed at his women's factory, only to be dismissed some time later when word reaches the foreman that she has a child out of wedlock. Being unaware of this, Madeleine is unable to do anything about it. Fantine enters a decline, which she blames on Madeleine, and finally comes to his attention in 1823, when she assaults a citizen named Bamatabois and is arrested by Inspector Javert.

He releases her--to Javert's chagrin--and puts her up at the hospital. The nuns tell him--but not her--that she's dying, so he begins working on bringing her daughter Cosette to Montreuil.

To his surprise, Javert demands to be dismissed disgracefully--for denouncing him as Jean Valjean. He orders Javert to remain at his post, but learns where and when the trial is to be held. Madeleine--who in fact is truly Valjean, like Javert suspected--promptly has a crisis: should he remain to help the needy of Montreuil, thereby allowing an innocent man to die in his place, or should he save the old man by confessing his true identity, thereby condemning the town that is mostly dependent on him?

In the end he decides to go to Champmathieu's trial in Arras, and confesses to being the convict Jean Valjean. No one believes him at first, especially since Javert is not around (being back in Montreuil), so he's able to walk out of the courthouse freely and with the determination to fulfill Fantine's last wish.

However, he's barely arrived by Fantine's bedside when Javert wrathfully confronts him. She wakes up during their argument and is carelessly informed by Javert that her benefactor is none other than a convict and her daughter isn't here like he promised--she dies, a combination of shock and her illness (which isn't named but is strongly implied to be tuberculosis). Javert arrests Valjean and throws him in jail. Valjean escapes a day later.

He retrieves the candlesticks from his house and his savings from Lafitte's bank in Paris, then buries them near Chelles on the road to Montfermeil. Returning to Paris, he's arrested again just as he's boarding the coach to Montfermeil. This time he's sentenced to death, since he's also falsely believed to be part of a band of highwaymen, but at the last minute an intervention from the king sentences him to hard labor for life instead. He returns to Toulon about eight years after he was paroled, this time as prisoner 9430.

While aboard the boat Orion, he asks to be freed so he can help a man whose life is in danger. In the process of returning from doing so, he slips and falls into the ocean. Everyone takes him for dead, but they never find a body for the very good reason that the body is still alive--he swam to safety. Then he makes his way to Montfermeil once more.

Valjean saves Cosette from the Thénardiers and brings her to Paris, where they're almost captured by Javert and his men on the Petit Rue Picpus. He and Cosette escape into a convent and are offered shelter there by Fauchelevent, an old man whose life Valjean had saved while he was mayor, and who got his current job by the recommendation of Madeleine/Valjean. Fauchelevent smuggles Valjean out so that he can officially come in, aided by a lucky coincidence caused by a nun's funeral, then secures a place for Valjean, posing as his dead brother Ultime, as the convent's second gardener.

When Valjean and Cosette move to a house on Rue Plamet he hires a House keeper named Toussaint.

At the Barricade and the Sewers[]

Valjean is clever enough to evade Javert repeatedly; he possesses (and likely made) a case for a small saw out of a coin, which he has the sense to carry when he goes to meet Thénardier alone.

He has a strong sense of duty and responsibility. As a young man he was keenly aware of his role as the provider of his family and never complained when some of his food was given instead to the children. During winter he couldn't find work, which made him desperate enough to break the law. As an employer he has a clear idea of what he owes to his employees, and more than makes up for his failings in the case of Fantine, once he finds out about them. As a mayor he takes it upon himself to have an intimate knowledge of the law--he cites specific parts to Javert to justify the release of Fantine. One of the reasons he resists arrest so long is because he feels a responsibility for Cosette, who has no other guardian or protector, and whose mother he still feels a need to compensate.

His perception is highly intuitive, somewhat added to by his readings and his philosophical musings, and rarely wrong. He sees past the Thénardiers' attempts to keep Cosette (or at least exchange her for a lot of money); he knows how best to frighten the Patron-Minette gang when he is their prisoner; he recognizes Cosette's distraction as something more than what she tells him it is, though he doesn't deal with it well.

Due to his love and responsibility for Cosette and the fact that he's technically on the run from the law, Valjean developed paranoia regarding any type of law enforcement around him--rather well-deserved, since Javert's among them--which makes him skittish in company and something of a recluse. This in turn makes him somewhat socially awkward, though most people tend to overlook this because of his kindness and generosity.

Valjean's strength, stamina, and agility are repeatedly remarked upon throughout the story. As a young pruner or menial laborer, his strength was already well-marked by the time he was convicted, which saw him given tasks that enhanced that strength far beyond that of a normal inmate. This earned him a reputation for it, and the nickname Jean le Cric ('Jean the Jack', as in the thing you use to lift a car to change the tires). He could lift a heavily loaded cart by himself, though with considerable effort; he could climb a wall without any equipment; he could stay in the sea at sunset long enough to be presumed dead; and he could carry a young man singlehandedly for likely miles, when he was already exhausted on top of being old (by the June Rebellion, he would've been 62 or 63 years old, depending on his birthday).

Valjean is at least a competent marksman; he accurately shot a mattress's fastenings so the rebels could use it to block the cannons at the barricade, when none of the others would for fear of missing and hitting the resident of the house.

ANOTHER STORY MUST BEGIN!

Daniel Diges in the Mexican Cast of 2018 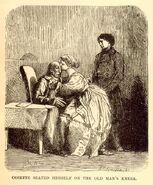 Valjean after he escaped