Les Misérables Wiki
Register
Don't have an account?
Sign In
Advertisement
in: Members of the Les Amis de l'ABC, Characters, Characters in the musical,
and 4 more

Grantaire is a member of Les Amis de l'ABC. He is best known for being the skeptic of Les Amis who believes in nothing, except Enjolras, who is his only reason for joining the society. An art student and skeptic with no interest in revolution. Grantaire is involved with the Friends of the ABC due to his friendship with its members and his admiration, veneration and love for Enjolras, who disdains him for his skepticism and drunkenness. He is noted to be extraordinarily ugly and a heavy drinker, and he sleeps through most of the fighting in the June Rebellion. Despite this, he eventually declares himself to be one of the insurgents and dies alongside Enjolras, hand in hand.

Grantaire is a skeptical man who is a part of Les Amis de l'ABC. Grantaire is knowledgeable and intelligent but has a skeptical outlook on life. He is constantly drunk as said by the novel. He was described as "unnaturally ugly" (or "frightfully ugly" and "inordinately homely" in some translations). Grantaire is also depicted as knowing all the best places to go to in Paris and is a boxer, gymnast, and dancer.

Unlike the other members of Les Amis de l’ABC, Grantaire does not believe in the causes that the group fights and dies for. The sole reason for his involvement with the revolutionary group is that he believes in Enjolras, the leader of Les Amis de l’ABC. Grantaire’s fixation to Enjolras is rooted in the leader’s passionate and wholehearted belief, which Grantaire lacks. Due to Grantaire's skepticism and near-constant state of drunkenness, his feelings for Enjolras are not reciprocated. Despite Enjolras treating him harshly, he looks up to Enjolras and saying "What a fine statue!". Grantaire, regardless of his feelings towards the cause, is a friend to the rest of Les Amis de l'ABC and valued for his easy-going nature and presumed friendliness.

Grantaire joins Joly and Bossuet at the Corinth on June 5, 1832 for breakfast. They drink heavily and are interrupted by Courfeyrac and the other Amis after Lamarque's funeral procession, and then Bossuet mentions to Courfeyrac that they should build the barricades outside the Corinth. Graintaire is scorned by Enjolras repeatedly and as a result, falls into a drunken stupor. The next morning, he awakens to find Enjolras about to be executed by the National Guard. Grantaire announces his support for the revolution, thereby condemning himself to die alongside Enjolras, asking him, "Do you permit it?" The two men exchange a smile and are killed holding hands.

Hadley Fraser as Grantaire in the 25th Anniversary

Grantaire, Feuilly and Enjolras as spirits in Empty Chairs At Empty Tables

Grantaire, offering himself to die alongside Enjolras 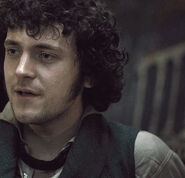