Les Misérables Wiki
Register
Don't have an account?
Sign In
Advertisement
in: Characters, Characters who passed away, Members of the Thenardier family,
and 4 more

Gavroche Thénardier is a character from the novel Les Misérables by Victor Hugo. He is the eldest son and the third-born child of Monsieur and Madame Thénardier, though this was never mentioned in the musical nor the movie.

Gavroche is the son of Monsieur and Madame Thénardier  He has two older sisters named Éponine and Azelma, and two unnamed younger brothers. He is also technically unnamed; the readers are told that he chooses the name for himself, but is not provided with his real name, as Madame Thénardier only loves her daughters, whereas Monsieur Thénardier pays more attention to moneymaking (and swindling his customers and racketeering) than he does to his children. Gavroche is told by his parents to live in the street since he would have a better life there.

The Thénardiers sell their two youngest sons to a lady named Magnon. Due to a freakish accident, the two boys are separated from Magnon without identification, and encounter Gavroche by pure chance. They are unaware of their identities, but Gavroche invites them to live with him and takes care of them. They reside in the hollow cavity of a giant elephant statue. This was no imaginary construction; located at the Place De La Bastille, it had been designed by Jean-Antoine Alavoine. The two boys leave Gavroche the next morning. They are last seen at the Luxembourg Gardens retrieving and eating discarded bread from a fountain. What happens to the two after is unknown.

At dawn, Gavroche helps Thénardier and his henchmen escape from prison due to the request of Montparnasse.

During the student uprising of June 5th, 1832, Gavroche joins the revolutionaries at the barricade. When Javert arrives to deliver information, he bravely reveals that Javert is actually a spy. Later, after an exchange of gunfire with the National Guards, Gavroche overhears Enjolras remark that they are running out of cartridges. He decides to help by going through an opening in the barricade and collecting the cartridges from the dead National Guardsmen. In the process of collecting the cartridges and singing a song, he is fatally shot by the National Guard.

In the musical and book, Gavroche's personality is shown to be similar to his in the movie. He has an air of childish arrogance and cockiness, stating once in the musical "It's me who runs this town". He is very self-confident. Despite his saucy exterior, he can often be sensitive and caring towards others, and is also affiliated with Les Amis. It is also made clear that Gavroche is in fact quite clever and street-smart, as he has survived many years by himself on the streets of Paris. He is also caring towards his sister, especially in the 2012 film adaptation.

Gavroche is featured in the stage musical. In the musical, much of his character remains unchanged. The only difference is that he does not seem to be related to the Thénardier family (in the song "Look Down," he refers to Thénardier by name, and claims that “all of his family’s on the make”).

In the 2012 film adaptation, Gavroche is depicted as the strongest supporter of the Les Amis de l'ABC, sharing their revolutionary ideas for the future, and is good friends with all of them: Marius, Enjolras, Grantaire, Joly, Combeferre, Jehan, and in particular, Courfeyrac. Gavroche sometimes hides in an elephant statue with other poor children, like in the book. Gavroche is thought of by the ABC as a brother and he thinks of them in the same way. Gavroche helps interrupt Lamarque's funeral procession, and also helps to build the barricade. When Inspector Javert poses as a rebel to give the ABC false information, Gavroche recognises and exposes him through Little People, leading to Javert being caught. Gavroche later warns Marius to be careful on the barricade.

Gavroche's relationship to Éponine is not mentioned, however he is seen with the Thénardiers when they are arrested. Gavroche is also shown to be devastated when she is killed. Marius later sends Gavroche to deliver a letter to Cosette, but instead gives it to Valjean. Valjean is impressed by Gavroche and tells him to stay away from the barricade. When Valjean arrives at the barricade disguised as a National Guardsmen to protect Marius, Gavroche recognises him and tells the students not to shoot him. When they hear that they are on their own as the people have not joined them and the other barricades have fallen, they begin to lose faith. Gavroche rallies them by singing Do You Hear The People Sing? again, causing them all to join in.

Gavroche later sneaks into the battlefield to collect the cartridges from the dead National Guardsmen while warning the soldiers that they won't give up, when and where he is fatally shot. Courfeyrac and the other rebels are horrified at Gavroche being in direct line of fire, and are devastated at his death. Courfeyrac retrieves Gavroche's body, and Valjean lays him in the wine shop. The ABC are enraged at the soldiers and restart the fight. He is laid next to Éponine and the others.

After the deaths of the rest of Les Amis, Javert arrives, having been released by Valjean, and is clearly disturbed by the casualties and is secretly very proud of Gavroche's courage. Javert pins his medal onto Gavroche's tunic out of pity and sadness. Gavroche is later seen in heaven alongside Eponine, Fantine, Valjean, and the members of Les Amis de l'ABC. 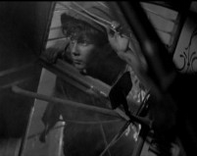 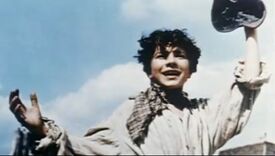 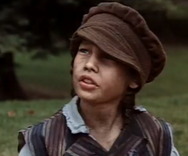 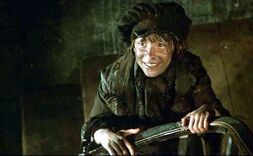 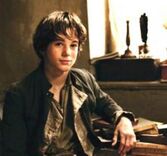 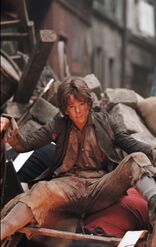 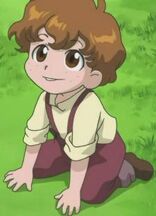 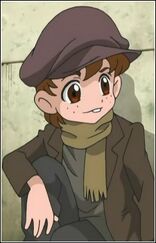 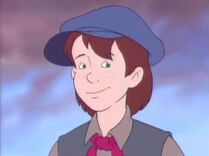 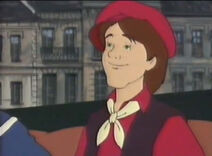 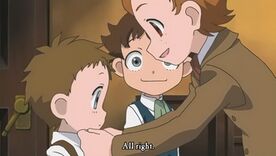 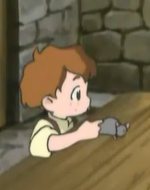