Frances Ruffelle is an English musical theatre actress and recording artist. She's best known for her original role of Éponine in stage Les Misérables and her performance in Eurovision in 1994.

Ruffelle was born in London, England, as Frances Jane Ruffell. Her father is a phone company engineer and manager. Her mother is Sylvia Young, the founder of the famous theatre school at which Frances trained, and her daughter is recording artist Eliza Doolittle. Her younger sister is actress Alison Ruffelle. She trained at the Sylvia Young Theatre School before attending the Italia Conti Academy of Theatre Arts.

Frances married Trevor Nunn's co-director, John Caird in 1990, in Westmister, London, whom she met during working on her role of Éponine. They have two children: Eliza Sophie (born 1988) and Nathaniel George (born 1990, Westmister). After two years of marriage, the couple split up in 1992. She also has a third child, Felix Bailey (born 1995, Westminster), with former boyfriend Rob Manley.

Ruffelle made her acting debut in Jack Rosenthal's TV Film P'tang, Yang, Kipperbang in 1982. Ruffelle's first West End appearance was as Louisa in Terence Rattigan's The Sleeping Prince. In 1984, she took on the principal role of Dinah in Andrew Lloyd Webber's Starlight Express in the original London cast. A year later, she had left Starlight and joined the original London cast of Les Misérables as Éponine. Though virtually an unknown outside of the West End, she and Colm Wilkinson were invited to reprise their roles for the Broadway launch. Ruffelle was nominated for and won multiple awards (including the Tony in 1987) for her role. She returned to the role she originated in 1997 in the West End of London. Her subsequent work on stage included the Ian Dury musical Apples in 1989 and Stephen Schwartz's Children of Eden in 1990, featuring on the cast albums of both. She has also starred as the female lead Roxie Hart in Chicago, as well as appearing in Lucky Stiff, and, more recently, in Schwartz Stories.

The creative team behind Les Misérables, Claude-Michel Schönberg and Alain Boublil, also used Ruffelle's vocals as Kim while writing Miss Saigon. Andrew Lloyd Webber also used her while workshopping Sunset Boulevard and Whistle Down the Wind, and she took part in both at the Sydmonton Festival.

Ruffelle, who previously played Roxie Hart in Chicago in the West End from September 2003 to June 2004, reprised the role for the show's 10th anniversary in 2007 and stayed with the production through into 2008. Her return to Chicago marked the first time she has performed in the show in the Cambridge Theatre, having only appeared in it when it was on at the Adelphi Theatre.

Ruffelle was set to appear in a revival of the Sherman Brothers musical Over Here! in January 2007, alongside Donna McKechnie, Diane Langton and Richard Fleeshman, however it was postponed, and was scheduled to open in Toronto in 2009.

In 2006 she performed in a musical based on the works of Stephen Schwartz, Schwartz Stories. In March 2008 she commenced a limited five-week season in the musical, Make Me A Song. She played the title role in Mathilde at the Edinburgh festival in 2008.

Ruffelle has also gained success on the screen - in both film and TV. Her film credits include 'The Wildcats of St Trinians', Mike Leigh's 'Secrets and Lies', 'The Invitation', 'The Road to Ithaca', and 'Ptang Yang Kipperbang'.

Ruffelle appeared as series regular Dawn Daniel-Spears in Sky's 'Dream Team', and series regular Kitty in Headless, for which she also composed the music.

Other television credits include playing Olivia in Warner Bros 'New Adventures of Robin Hood, Denise in Alan Bennett's 'Objects of Affection' for the BBC and Susan in 'SWALK' for Thames Television. She has starred in 'The Bill' (Thames Television), 'Strangers' (ITV), 'The Equaliser' (Universal) and 'The Hard Word' (Thames Television).

In 1994, Ruffelle was chosen to represent the United Kingdom at the Eurovision Song Contest. She sang all eight (8) songs at the pre-selection, and British televoters chose "Lonely Symphony" to represent the UK, by televoting. It went on to come in 10th at the contest in Dublin. When asked about her motivations for joining the competition, she jokingly replied that since none of the four constituent nations of the UK (Wales, Scotland, England and Northern Ireland) had qualified for that year's football World Cup finals, it was her responsibility to try to restore some national pride.

In 2010, she appeared in the 25th Anniversary Concert of Les Misérables at the O2 Arena as part of the original London cast and in 2011 starred as meddling Essex mother Fastrada at the Menier Theatre's production of 'Pippin'.

She opened in the title role of Piaf in Pam Gem's Piaf in February 2013 and received a UK Theatre award nomination for Best Actor and in 2014 created the role of Bella in The A-Z of Mrs P at Southwark Playhouse. Frances also performs her critically acclaimed solo shows, Paris Original and Beneath the Dress, in London and New York.

In 2015, Ruffelle played the role of Naomi Green in the ITV sitcom Birds of a Feather. She appeared in three episodes.

Ruffelle, performing "On My Own" in 1997 concert 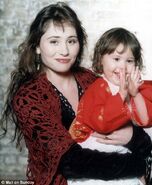 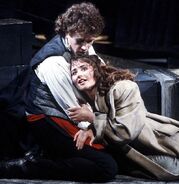 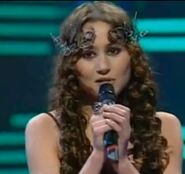 Frances and Michael Maguire with their Tony awards, 1987 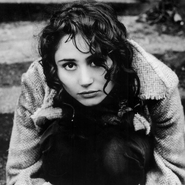