Les Misérables Wiki
Register
Don't have an account?
Sign In
Advertisement
in: Members of the Les Amis de l'ABC, Characters who passed away, Characters,
and 4 more

Feuilly (pronounced: Fui-ee) is the only member of Les Amis de l'ABC who is not a student; he is a workingman. An optimist who stands as a sort of ambassador for the “outside,” while the rest of the men are very focused on their little corner of the world.

Feuilly was a fan-maker, an orphan, who with difficulty earned three francs a day, and who had but one thought: to deliver the world. He had still another desire - to instruct himself, which he also called deliverance. He had taught himself to read and write; all that he knew, he had learned alone. Feuilly was a generous heart. He had an immense embrace. This orphan had adopted the people.

He has great interest in foreign affairs and history, and he has a particular interest for Poland, shouting, "Long live Poland!" while marching to the barricades. He is the only named workingman among the Friends of the ABC. Feuilly is revered by Enjolras, and he dies on the the barricade in the June Rebellion.

Being without a mother, he had meditated upon his mother country. He was not willing that there should be any man upon the earth without a country. He nurtured within himself, with the deep divination of the man of the people, what we now call the idea of nationality. He had learned history expressly that he might base his indignation upon a knowledge of its cause. In this new upper room of utopists particularly interested in France, he represented foreign nations. This poor workingman had made himself a teacher of justice, and she rewarded him by making him grand.

In the 2012 film, he is killed by the National Guardsmen while he fends them off with a pistol, as they shoot him in the chest while firing up to the window that he was taking cover behind. 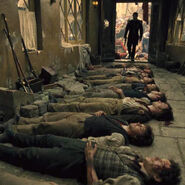 Dead Feuilly (the first one)

Feuilly in "Drink with me"

Feuilly just before being shot