Fantine is the tritagonist in the novel Les Misérables by Victor Hugo. She is a grisette (a young working-class French woman) who is the mother of Euphrasie known throughout the film as Cosette.

Fantine was born in Montreuil-sur-Mer, in 1796, but it was never revealed as to who her parents were. In fact, the name "Fantine" was given to her by a random passer-by who encountered her when she was a child, and she just agreed with it, and went by that name from then on. Later, she went to Paris to seek her fortune. By then, Fantine had blossomed into a truly beautiful young girl with blonde hair and fine snowy white teeth.

She is abandoned by her lover, Félix Tholomyès when she is twenty. Subsequently, she is unable to take care of her daughter, Euphraise. In 1818, when Euphraise is "nearly three", Fantine leaves her in the care of the Thénardiers, who are innkeepers in a village called Montfermeil. Unfortunately, Madame Thénardier spoils her own daughters, Éponine and Azelma, while abusing and overworking Cosette. Madame Theanardier even sells Cosette's wardrobe by 60 francs in Paris, France. Meanwhile the Thénardiers continue to send Fantine letters claiming that Cosette is being well-treated, but that she is always ill and requires money to be treated. Fantine falls for their tricks and continues to send money, which the Thénardiers use for their own interest and to further indulge their own children.

Fantine finds work at Monsieur Madeleine's factory, and, being illiterate aside from being able to write her own name, has other people write her letters to the Thénardiers. In 1822, a female supervisor who discovers that she has an illegitimate child fires her, as having children yet being unmarried was highly scandalous at the time.

To meet repeated demands for money from the Thénardiers, she sells her hair, then her two teeth, and is finally forced to become a prostitute.

Over time, she becomes fatally ill with tuberculosis. Valjean learns of her situation when Inspector Javert arrests her for attacking a man who called her insulting names and threw snow down her front and sends her to a hospital. She spends several weeks in the hospital, delirious and thinking of her daughter. Valjean promises to look after Cosette in her place. Later, when Javert confronts Valjean in her hospital room, because her illness has made her so weak, she dies of shock after Javert reveals that Valjean is really a prisoner and has not brought Cosette to her (after the doctor encouraged that incorrect belief that Valjean's recent absence was because he was bringing her daughter to her).

In the beginning, Fantine was a ravishingly beautiful young girl who could be compared to a Greek Goddess: thick, long, slightly wavy blonde tresses, delicate features, deep blue eyes with long dark eyelashes, rosy lips, splendid white teeth, a statuesque physique, and small arched feet. She was also said to have long, white, and slender fingers. Her two most notable features were her blonde hair and white teeth, to the extent where she was described as having "gold and pearls for her dowry, but the gold was on her hair, and the pearls were in her mouth". However, as she gradually sank into poverty, she was forced to sell her hair and her two front teeth to pay what the Thénardiers said is for Cosette's medicine and clothing.

Edyta Krzemień in the Polish production

Morena Valdés in the Mexican Cast of 2018

Sylvia Sydney, 1952 film
Add a photo to this gallery 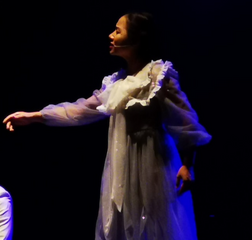 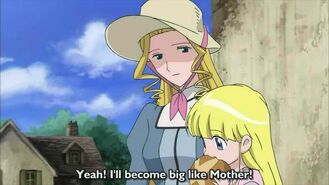 Retrieved from "https://lesmiserables.fandom.com/wiki/Fantine?oldid=29568"
Community content is available under CC-BY-SA unless otherwise noted.