Les Misérables
The Phantom of the Opera

Colm Wilkinson is an Irish singer. He is best known for originating the role of Jean Valjean in Les Misérables and for playing the title role in The Phantom of the Opera.

After playing in several Irish bands, in 1972 Colm was cast as Judas Iscariot in the Dublin production of Andrew Lloyd Webber's Jesus Christ Superstar; a role he went on to reprise in London and on the British national tour.

In 1976, Colm sang the part of Che on the concept album for the musical Evita. Instead of auditioning for the role when the production was launched in London, Colm launched a solo career as a singer-songwriter.

In 1985, he collaborated with Andrew Lloyd Webber once again, originating the role of the Phantom in The Phantom of the Opera at the Sydmonton workshop. Colm was offered the role for the show's début on the West End, but instead chose to play Jean Valjean in Les Misérables.

The London production of Les Misérables opened in October 1985, and transferred to Broadway in March 1987. Originally, the American Actors' Equity Association refused to allow Colm to play the part of Valjean in New York, due to their policy of hiring only American actors. At this, producer Cameron Mackintosh refused to open the show unless Colm played Valjean, and Actors' Equity relented. Colm won the Helen Hayes Award, the Outer Critics Circle Award, and the Theatre World Award for his performance; he was nominated for the Tony Award and Drama Desk Award for Best Actor in a Musical.

Colm plays the part of Lord Darcy in the third season showing of Showtimes miniseries The Tudors which began airing on 12 April 2009.

On 3 October 2010, Wilkinson was a special guest at the 25th Anniversary Concerts of Les Misérables, at the O2 Arena, alongside many other original cast members. He performed as part of a 'Valjean Quartet'; alongside Alfie Boe, John Owen-Jones and Simon Bowman (each of whom had previously played the role of Jean Valjean in various productions of Les Misérables). This was recorded as a single and performed live at the London Palladium; during the Royal Variety Performance on 16 December 2010.

A year later, on 1st and 2nd October 2011, he appeared - alongside a number of former Phantoms - at the 25th Anniversary Celebration of The Phantom of the Opera, at The Royal Albert Hall.

Colm Wilkinson returned to Les Misèrables as Monsieur Myriel in the 2012 film. 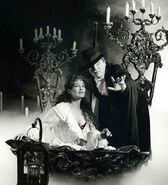 As lord Darcy in The Tudors